Cell phones are not suitable for your business-critical work environment. They are unreliable, higher in cost, and do not give you the safety features you need to protect your workforce.

MOTOTRBO™ digital radios offer you a wide portfolio of radio solutions to meet your needs. 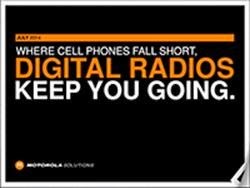 View our Presentation
Posted by RCS Communications at 2:49:00 PM

MOTOTRBO™: Meeting The Unique Needs of Every User

A Blast from the Past. Part One

Visit this link for a blast from the past...
http://www.wb6nvh.com/Moto42/Moto42.htm

Introduction
Please note that this page is regularly revised and added to.  There will be some models not shown and some information missing, which will be added in time.  The years given are usually approximate, as exact records are not publicly available if they exist at all.
The Galvin Corporation created what they argued was the first production AM broadcast car radio, in the early 1930's. Up through the mid-1930's, they also made specially modified car radios to receive police broadcasts, on a "to order" basis for nearby police departments.  These were the days when the company was small enough that one could walk in off the street and have a special modification of a "stock" radio done almost "while you wait."   Galvin began producing "Motorola" brand mobile AM police one-way radio equipment in 1937, on a large scale, with a modified broadcast automobile radio first called the "Police" and later dubbed the "Police Cruiser." In approximately 1939, Galvin introduced two-way operation with the T-69-20A mobile police transmitter, a VHF AM two-piece unit which operated in the 30-40 Megacycle range. Base station transmitters and receivers were also produced to communicate with this mobile equipment.
Posted by RCS Communications at 9:25:00 AM

IT woes: Prepare for the worst

Being prepared isn't just for Boy Scouts. Business owners need an IT disaster recovery plan to keep files and hardware safe. Regularly back up files, and find an alternate campsite for data that you can access remotely. Making sure your business has a port in the storm will help you rest easier at night. Scout's honor.

We can assist you!!!