Motorola Solutions announced it will introduce a suite of public-safety mobile applications with messaging, mapping, push to talk (PTT) and telephony as core software.

With the expansion of public-safety broadband, interoperable mobile applications are a highly effective way to provide critical intelligence to officers in the field and personnel at the command center, a Motorola statement said.

“The need for real-time intelligence has never been more important to public-safety users,” said Bruce Brda, executive vice president, products and services, Motorola Solutions. “Apps for messaging, mapping and other tasks are part of daily life for citizens, but these capabilities have not yet been developed and deployed for public-safety users. Motorola Solutions’ suite of public-safety mobile apps is purpose built for the needs of our customers and provides an integrated, interoperable solution for sharing critical information and intelligence.”

The suite includes a core set of apps to which capabilities such as apps for live video streaming, electronic citations, database search and collaborative “whiteboarding” will be added. The suite includes the following:
• Messaging, which lets first responders securely share text messages and photos with individuals or talk groups across smartphones and two-way radios, enabling faster communication and collaboration. Messaging enables a user to send a photo to a voice talk group.
• Mapping, which enables location-based collaboration by showing nearby officers and quickly creating geofenced voice- or text-based communications groups with officers in the vicinity. It allows an officer to talk to another officer one block away even if he doesn’t know the officer’s name.
• WAVE, the company’s PTT solution that lets smartphone users securely communicate with a press of a button, also provides a secure PTT bridge with land mobile radios, enabling teams to communicate using PTT across networks and devices.
• Telephony, which enables users to make secure, encrypted phone calls.

The apps will be deployed using a software-as-a-service (SaaS) model. The apps are connected by a capability that enables interactions between apps without requiring the user to return to the app launcher. Users can seamlessly move from app to app.

The apps suite is highly secure, requiring the authentication of users, devices and infrastructure, and all media is encrypted. The suite also features convenient single sign-on, requiring users to log in only once to access all applications, and a common address book that carries consistent groups and contact lists across apps.

See how public safety applications deliver
Mobile Intelligence to users in the field.
Click the text above to see another short video.

If your department wants interoperability for a large variety of radio users, the NX 5000 supports NXDN, DMR and P25 phase 1 and 2 plus FM analog in a single radio.

If your intention is going fully digital, or you want to maintain both digital and analog then a NX 5000 radio can simultaneously support two digital protocols and analog. 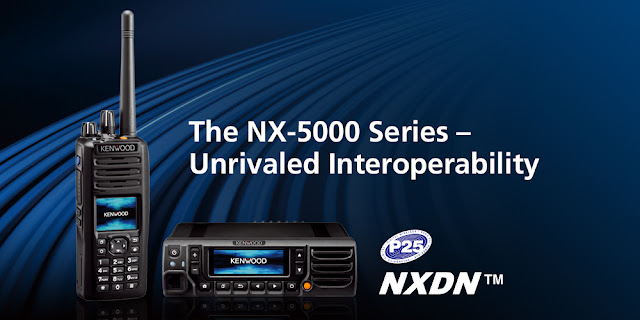